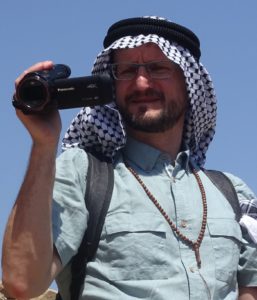 Doctor of Humanities in the field of literature at the Faculty of Oriental Studies of the University of Warsaw, specializing in Indology, Sanskrit.

Research interests: I am interested in the literature of the Indian antiquity and Middle Ages, especially its religious, philosophical and mythological aspects. So far, I have devoted most of my attention to the analysis of the Mahābhārata and Bhāgavata Purāṇa. I am interested in rituals, religious and ascetic practices, theology. As part of my studies, I dealt with the religions of the subcontinent, philosophical texts of brahminical schools, art and science of the subcontinent: astrology, architecture, Indian aesthetics (rāsa), traditional texts of Sanskrit grammars.

The aim of my paper is to discuss the interdependence of the three geographies connected with the Mahābhārata (MBh): sacred geography depicting the world in which the epic heroes operate, mundane geography, in which India is depicted and religious geography inspired by the epic. I will present maps and diagrams based on the MBh descriptions. I will show how the epic authors imagined the universe and try to reconstruct location of the Indian provinces mentioned in the text. I will look at popular pilgrimage sites (Mathurā, Kurukṣetra, Dvārakā) and at places related to the MBh (Barnava, Bairat, Kampil) which do not attract crowds. Taking Bodhgaya as the example I will discuss the mechanisms of imposing and coexistence of Buddhist and Hindu traditions. In Pakistan, I will try to see how the pilgrimage sites function outside the Indian border. The presentation will be enriched with films and photographs collected during my trips to Pakistan (2018) and India (2019-2020). I will also show interactive maps related to the three geographies, which were created as part of the translation project of MBh 6-11 into Polish in which I participate.

Videos related to the article:

video 3: interview with Guruvacan, teacher from the Sanskrit school in Barnava (Filip Ruciński)

video 5: the guide in Katas Raj

Images related to the article (galery):

This session of the Seminar approaches the Mahābhārata in a variety of ways. Our first paper finds a coherent philosophical theme of monism in the text, explaining the manifestation of the world from Brahman through the concept of vyakti, or emergence. Our second paper examines versions of the Mahābhārata created in the Jain religious tradion, beginning with the 8th century Harivaṃśapurāṇa and its depiction of the repentance of Kīcaka, who becomes a Jain monk. Later Jain reinterpretaons of the text take varying approaches to this character whose depiction in Vyāsa’s text is entirely evil. Our third paper explores the geography of the Mahābhārata, its mundane landscape, the sacred sites visited by its heroes, and the religious geography of the text’s audience who seek to visit sites made sacred by the events in the narrative. The diversity of methods on display in this session demonstrates some of the many ways scholars are deepening our understanding of the Mahābhārata. The Seminar invites and encourages methodological and interpretive creativity.

This article is presented as part of the MBh translation project. The project is conducted under a grant from the Polish Ministry of Science and Higher Education, National Humanities Development Program 2016 Uniwersalia Module 2.2 (Project ID: 22H 16 0357 84). There are 6 researchers participating in the project, 5 translators—Joanna Jurewicz (project manager), Anna Trynkowska, Monika Nowakowska, Przemysław Szczurek, Andrzej Babkiewicz—and one IT supervisor, Sven Sellmer

(Digital Humanities Laboratory of the University of Warsaw – LACH)